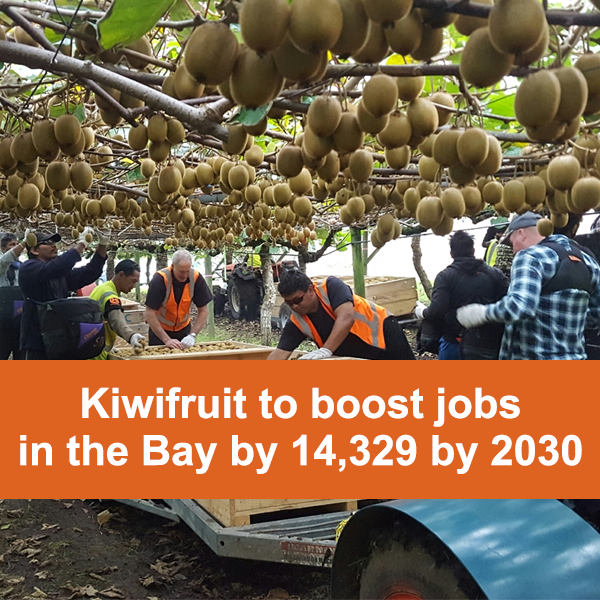 In a country which is already struggling to find seasonal workers, the take-off of kiwifruit is set to raise the demand for workers even higher over the next 13 years. Earlier this year, The Ministry of Social Development declared an official seasonal worker shortage in Hawke’s Bay to assist orchards to cope with the demand for seasonal staff - allowing anyone on a holiday visa to convert this into a temporary work visa for the region. This was too little, too late, for the orchards, who suffered a deficit of approx 400 workers in their apple and pear orchards this year. Hopefully, this will not be the same scenario for the kiwifruit growers in Tauranga in future years.

It is such wonderful news that the kiwifruit industry is booming in Tauranga. The rise of the kiwifruit is true a rags to riches story for the Bay, and kiwifruit is set to more than double global sales to $4.5 billion by 2025. As a New Zealander, it is strangely satisfying to see a fruit which is so iconic to New Zealand being given a shot at global domination (of the fruit trade), but will the hopes and dreams for the small furry fruit be dashed by the lack of workers?

A report by Waikato University Professor Frank Scrimgeour completed last year, said worker projections were very strong in the Bay of Plenty. It had 10,762 full time equivalent jobs at that time and predicted there would be an additional 14,329 jobs by 2030 - alongside a 135 per cent increase or $2.4b, GDP contribution.

In previous years, seasonal employers relied heavily on backpackers which were working their way around New Zealand and workers which were granted Regional Seasonal Employer Limited Visa. This means up to 11,100 people a year can apply to work for a recognised seasonal employer in the horticulture and viticulture industries for up to 7 months in any 11-month period - this is open to citizens of most countries.

Sounds great right? So why the shortages? Using Hawke’s Bay orchard crisis as an example, it was recorded that approx 3000 workers were recruited from around the Pacific to work in the area under the Recognised Seasonal Employer scheme, and in the central town of Bostock this year, the RSE workers outnumbered locals and backpackers for the first time. There had actually been a seven percent increase in backpackers to the region in the 12 months prior and Tourism Hawke's Bay could not explain why there appeared to be fewer willing to work (it could not even be pinned on freedom camping phenomenon, although it was attempted).

The lack of backpackers coming to NZ for seasonal work should surely prompt a change in the RSE process. Major fruit growing outfits, industry experts, and other government agencies will need to get their heads together to figure out the best course of action for the future.

Thirteen years may seem like ample time to gather up near on 15,000 enthusiastic seasonal workers, but in a country which is already suffering a seasonal worker shortage in one of the most beautiful places on the planet, can we really expect to fill these numbers without a revision of the visa processes? We will keep you updated at www.agstaff.co.nz

To apply for seasonal and temporary agricultural jobs, visit our Job Search page